In 1980 the current owner & vigneron, Rusty Cook, commenced his studies in Oenology at the Roseworthy Campus of what is now amalgamated into Adelaide University.  Since that time he has established and managed vineyards and wineries in:

The back story to Rusty acquiring Providence commenced in 1996 which by invitation to visit from a near neighbour, Stuart Bryce, Rusty began his association with Providence.  This was initiated by mutual friend, industry stalwart and past owner of Heemskerk and Jansz, Graham Wiltshire.

Stuart’s story is far more interesting and so as site author I (Rusty) prefer to tell of his very significant contribution to Providence/La Provence and the Australian wine industry.

Having a lot of experience in meteorology as a military pilot he researched, mapping the climate in each area from 1939 to 1976.  Interestingly, before the outbreak of WWII, details of weather in Australia were largely confined to major population centres or simply basic readings of regional temperature.  Having done this and having enough graph paper to wallpaper a large room, he considered Tasmania as worth some further research.

This led to a trip to Tasmania in 1976 and the discovery of what was then La Provence Vineyards.  Following an attempt to create a small vineyard on a property at Nabowla, about 20 Kms north of La Provence a meeting with a colleague, Gavin Scott, a once part owner of La Provence, led to an additional ‘look’ at that property.  In 1979 Stuart made an offer to the then sole owner and in January 1980 took possession of the vineyard.  The objective to make the best expression of Tasmanian Pinot Noir.

In 1985, following a move to Tasmania with the RAAF as Senior Air Force Officer the neighbouring property was purchased.  Originally an old apple orchard ‘new-plantings’ of Pinot Noir and Chardonnay were undertaken.  This also included extending the original Miguet plantings.

Notwithstanding the additions, Providence is a boutique specialist vineyard and all wines made on site.  Concentration is on producing the best Tasmanian Pinot Noir and Chardonnay and that is exemplified in the show successes recorded. Most significantly, Providence holds the honour of winning the Australian Gourmet Pages National Pinot Challenge – both sections (wine against wine and wine with food) twice.  This achievement has yet to be matched and Providence is forbidden from re-entering that wine! 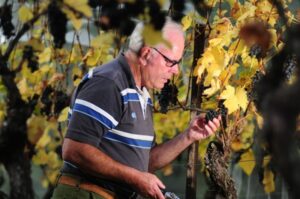 Providence winemaking over the years

From 1980 to 1985 grapes from the vineyard were sold to Graham Wiltshire of Heemskerk fame and the recognised father of Pinot Noir in Tasmania. From 1986 to 1993 Heemskerk made wines under contract for La Provence/Providence Vineyards.  The relationship with Graham Wiltshire was intrinsic in Providence focussing on excellence in viticulture and the aim to produce one of the best Pint Noir wine in Tasmania.  When Graham died in March 2014 the industry lost a true pioneer and Stuart lost his mentor on all things Pinot.

In 1993, following Graham’s semi retirement and so leaving Heemskerk, Andrew Hood commenced making the wine for Providence Vineyards.  Andrew’s understudy, Jeremy Dineen, renewed his relationship with Providence from 2015 – 18 as part of the migration to today where winemaking is performed onsite incorporating the latest in European technology.